Solar Smash Planet Destroyer Simulator Guide – The planet-slayer simulator, Solar Smash, has attracted millions from all over the world and its excellence is applauded everywhere. Although, what seems like a fairly simple game, is in fact, quite difficult to master.

Mainly because the fewer shots required to bring the planet to your knees, the better the player is considered. However, with dozens of weapons in your arsenal, it can be a bit of a pickle to choose the right ones and fire’em away.

Players going gun-blazing are often disappointed by the audacity of the planets to stand tall, even after dozens of shots, but if you’re to use the right weapons on the weak spots, you’re likely to stand and deliver. On a lighter note, spamming weapons are only going to make things worse since they’re merely there for the fun part, but not the best idea to destroy the entire planet in fewer shots.

But since mastering Solar Smash for a beginner could be a bit of a challenge, we’re here with a brief guide that’ll help you bring chaos to an entire solar system.

Solar Smash is a fairly simple game and requires little to no effort to understand the mechanics of the game, but mastering these mechanics is a different cup of tea. New players playing the game should start by spamming the weapons to get the lay of the land and understand how each weapon works but once you’ve decided to challenge yourself and are looking to destroy the planet, destroy the core of the planet to obliterate it, once and for all.

In Solar Smash, there’s a handful of planets on the offering, each with its own civilizations and population, and your task is to destroy the planet however you please. Whether it’s natural phenomena like the Meteor shower or UFOs attacking the planets, the planets won’t know what hit them and with each shot, the planets will start to crumble down to their core.

What are the Best Weapons to Penetrate the Core in Solar Smash?

There’s a wide variety of weapons in Solar Smash that are made available throughout the gameplay and each of them has its unique abilities and capabilities. But, because all of them are so unique, all of them are only suitable for specific conditions.

For instance, if you’re in a hurry to get to the core of the planet, Celestial Being is probably the best weapon to penetrate the core of a planet in Solar Smash Planet Destroyer Simulator.

Furthermore, weapons like The Drill, listed under Vessels & Satellites represented by a downward rocket, are also lethal weapons that can instantly penetrate the core of the planet.

Similarly, EMP Missile found in the futuristic weapons category can also deal significant damage profile to the planet, and it’s one of the best and quickest ways to penetrate the core of the planet in Solar Smash. 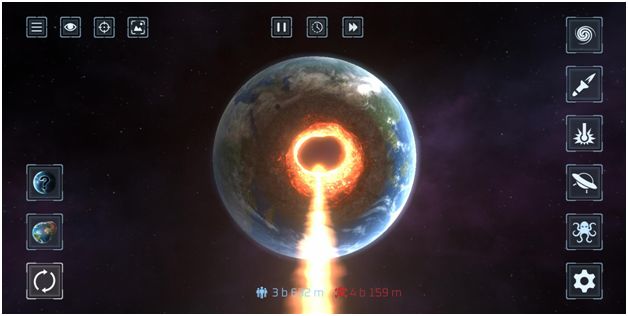 For a handful of weapons in Solar Smash including Laser Beams, Rockets, Meteors, and more, players have the ability to customize the size of the impact as well as the color of the weapons. Weapon customization can be made by using the clog that appears at the bottom right of the screen when you’ve selected a particular weapon.

Solar Smash is a phenomenal planet destroyer and its non-competitive nature makes it appeal to a wide variety of gamers from all over the world. And the age group doesn’t even matter, whether it’s 6 to 36, players from all age groups are playing this one and letting their devilish side take on and eat up entire civilizations.

Jokes aside, Solar Smash is definitely a fun-to-play game and players can go for hours before getting weary and that fact alone makes it a contender for one of the best android games of all time.

Akshara Singh - April 8, 2022 0
Download Line Mod Apk Unlimited Coin Stickers 2022 - Chat applications are like media to communicate in our daily lives, to stay in touch, and...