How to Fix IDM Cannot Download on Google Chrome – Internet Download Manager or many call the acronym IDM is a software that can help to manage downloads on a computer or laptop. Many have used IDM and find it helpful because IDM is known for accelerating the file download process.

How to Fix IDM Cannot Download on Google Chrome 2022

Here we will discuss how to fix a problematic IDM on Google Chrome by adding the IDM extension to Google Chrome. IDM can run automatically in almost all web browsers.

But there may be some problems with integration with IDM and Google chrome. Not a few also experienced IDM not being able to download automatic files and IDM not working on Google Chrome.

IDM is the best download manager that you can use for computers and laptops. IDM is paid software, but it’s totally worth the amount paid. You can get it with a one-year subscription for $ 12. IDM is popular because it can speed up downloads and can manage downloaded files more easily.

Of the many features of IDM, most people use IDM for speed. Downloads on IDM are faster than downloads from normal browsers without IDM. Technically, IDM divides the file into several parts which are then downloaded separately and then merge at the end. IDM accesses the server several times and then downloads are carried out in parallel to speed it up.

Also read:   How to Jailbreak on iOS 12 and How to Install Cydia for iPhone / iPad

Extensions are a bridge between IDM applications and web browsers. This extension is what helps IDM capture downloads from a web browser. IDM uses an extension on Google Chrome as a means of connecting so that you can download files from IDM via Google Chrome.

If IDM integration with the browser is broken, IDM will not be able to download files automatically and IDM will not work. In such a case we need to improve the integration so that IDM can function properly again.

Sometimes there are fake extensions or extensions that have malware or other viruses that can cause IDM not to work on Google Chrome. So always be careful when you install new software on your computer and laptop. Always make sure to install from official and trusted sources.

#2. How to Fix IDM Cannot Download on Google Chrome

If the IDM extension is missing from the browser or the integration is broken, IDM will not function properly. IDM will usually pop up a small warning for the download command when you play a video. However, if it does not appear, it means that your IDM has a problem.

If the extension is not active, simply activate the extension then restart Chrome by closing chrome and reopening it. Then try to download some files whether IDM can be downloaded or not.

If not, it means there is a problem with the extension. Then you have to uninstall it first and then install the extension again.

#3. How to Install IDM Extension to Google Chrome

But if the above method still doesn’t work, you can install the IDM extension directly via the Google Chrome Webstore directly. [ Click Here ]

After that, you have to restart chrome by closing and re-opening chrome google so that the extension can run properly. However, make sure that the settings on IDM itself are available for Google Chrome. 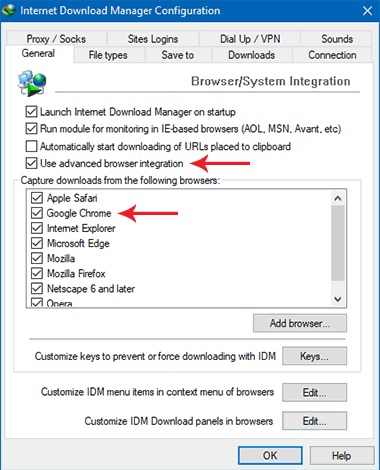 This is the explanation of how to fix IDM that cannot download on google chrome, I Hope this article is useful. If you encounter problems when Internet Download Manager is not running or IDM cannot download files automatically. Use the above IDM method.

HDMI VS VGA: Which is Better? Complete Guide 2022