25 Best Small Size Games For PC Windows 10 PC – For some people, playing games is a way to get rid of boredom. Games themselves can be played anywhere, both on computers and smartphones, which are now being favored by young people. However, for those of you who prefer PC games, there may be some obstacles, one of which is the RAM embedded in the PC.

Especially if you want to play games on a PC or laptop with only 2 GB of RAM. Some people or maybe you yourself are confused about choosing a game that is suitable for a PC or laptop with such a small RAM. However, you don’t need to worry because even with a small RAM, you can still play games smoothly. Then, what are some cool, small games for PC that are suitable to play?

There are several genres of games such as light PC games of war, shooting, or adventure. You can freely choose your preferred game genre then download the file and install it. And these games can be installed on Windows XP, Windows Vista, Windows 7, 8, 8.1, and 10 OS.

Note: we have provided complete information about the game below so you can directly buy or download the game via the link below, and also pay attention to PC specifications, trailers, and reviews. 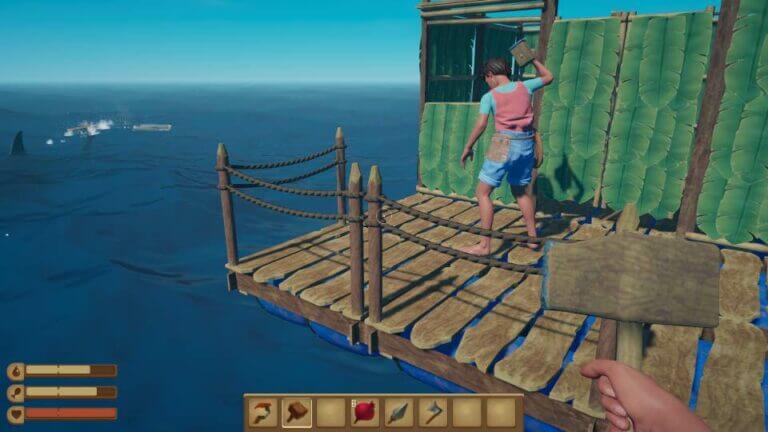 The first cool small game for PC you can play is Raft. This game is about survival in the middle of a fierce ocean, you can build houses, make weapons to survive, and cook.

Starting from collecting debris scattered in the middle of the sea and making a house from a comfortable raft and staying alert because there are sharks.

This raft game is also available on Steam, please download it for free right away here.

Have you ever thought about how to become a Donald Trump to win the political game? Instead of being curious, you can download and try playing this Potus Trump game. You can defeat unique enemies like Iron Man and others.

Not many know that the best games in the class of The Witcher can actually be played on PCs or laptops that have minimal specs. Although this cool, small game for PC is only similar to The Witcher game because the game area is not as large as The Witcher, this game is worth a try.

It is one of the Moba games for PCs and laptops that is similar to the Dota 2 game. This UnnyWorld game looks fresher and the gameplay is simpler so that it is much in demand by gaming beginners. But in terms of fun, this small PC game is no less interesting than the Dota 2 game.

Game Lost This item is included in a game whose graphics are ordinary, it can even be said that the graphics tend to be lacking. However, for the matter of gameplay, it is quite interesting. The way the game is played, you just have to go through a wide and dark labyrinth. Well, in such circumstances can you find what you are looking for? Curious, right?

This game is more similar to Minecraft. To be able to complete this game you are tasked with building a shelter in order to survive zombie attacks. Good graphics and interesting gameplay make this cool, small game for PC worth playing on a PC with minimal specifications.

This game is similar to Need For Speed, the difference is that the Burnout Paradise game more often shows how to destroy cars. Not only for car racing but also for motorbikes.

You can also play this light PC game World of Tanks Blitz, especially for those of you who like war Action games. Using game graphics that will spoil your eyes. Tells the story of a very intense battle between tanks.

You will control armored vehicles aka tanks with 4 different classes, and you can upgrade tanks to make them even stronger against enemies, which can be played online.

Trove is a massively multiplayer online role-playing sandbox game managed by Trion Worlds. Similar to the Minecraft game and this game is also played by many people because of the fun of being able to play alone or with friends.

This one game is indeed suitable to be played, especially for you lovers of FPS and action games because it can be played on PCs or laptops with 2 GB of RAM.

At first glance, this game is similar to the PUBG and Fortnite games because they survive against enemies on the battlefield and kill enemies secretly or openly.

Well, if you want to play the Splinter Cell Blacklist game on a PC or laptop with only 2 GB of RAM, it is recommended to change the image resolution to low.

This game uses a card game to play, you can upgrade the card to make it even stronger. This game also provides a PVP mode where you can duel with other people or with your own friends.

Classic game lovers should try to play this one game. A game that tells the story in an eternal battle arena where warriors fight against enemies to prove who is the best in the world. Every match in this game is to test your skills, speed, and strength.

The next small game for laptops that you can play is Clicker Heroes with 3D graphics. Adventure and RPG genres, so this game is very suitable to play, especially for those of you who like 3D action games. This game is similar to an RPG to an FPS in that you have to complete several missions in order to earn EXP.

Rules to play this cool small-size game for pc you have to kill enemies and then craft your own items. An easier way that can be used by stealing from enemies who have been killed.

Well, maybe you will like this one game that can be the right choice because it does not require a large amount of RAM. This game is a unique blend of high-class strategy and highly realistic simulation. Your pathogen has just infected ‘Patient Zero’ and now you must end the disease from a deadly global outbreak.

Love strategy simulation games? Then the Factorio game you can play on a PC or laptop whose RAM capacity is only 4 GB. Factorio is a game where you will build and maintain a factory. You will add resources, research technology, and build infrastructure.

Fishing simulation games with a very small size, only around 300MB, of course, will be interesting to play because many gamers in Indonesia also like fishing games. If you find it difficult when fishing in the real world, maybe you can try fishing in this game because there is no need to heat up.

Equipped with beautiful and epic 3D graphics, more than 1130 types of fish in this game, and more than 100 types of verse that you can choose yourself.

Do you know the very popular old-school game called Harvest Moon? This Stardew Valley game is very similar and of course fun too, you will be a farmer to take care of the garden, pets, etc.

The story revolves around you inheriting a farm plot from your grandfather and armed with a hand tool and just a few coins, you will start your new life as a farmer and aim to become a successful farmer.

Terraria is a 2D Sandbox action-adventure game developed by Re-Logic. The gameplay of Terraria is exploration, crafting, building, and fighting with various creatures in a 2D world. Terraria received many positive reviews on Steam and is well worth playing.

This comedy game will be fun and funny to play alone or with friends. The game is a physical puzzle in which players play a customized and flexible human. The main character named Bob has no superpowers, he is purely human.

Simulation game driving a car or truck on rough terrain like a real offroad in the real world where it is difficult to control the vehicle on muddy roads, rivers, and others. You can play freely exploring the whole map with various obstacles or you can follow missions.

The mission in this game you have to deliver the wood to the destination, of course walking with an ordinary vehicle is already difficult, how about adding a heavy load of wood will certainly be a challenge.

You can simultaneously choose 3 cars at the beginning to play. To help, for example, the first car sinks and you can use the second car to tow it. Can be played online with friends.

LIMBO is a platform puzzle game from Playdead that has a unique and fun storyline and is doing well on Steam. The main character in the Limbo game is a boy who doesn’t have a name.

Yang wakes up in the middle of an unknown forest, looking for his missing sister, but he finds only a few people who want to try to attack him.

ETS 2 is the most exciting and fun truck driving simulation game even though this game was released in 2012 because until now, there are still many players the developer continues to update and present various new content that makes the players want to play again.

Because this game was originally named Euro so you will drive trucks from various brands such as Volvo, DAF, Scania, Mercedes Benz, MAN, Iveco, and Renault in European countries such as Austria, Belgium, Czech Republic, Denmark, Estonia, France, Finland, Germany, Hungary, Italy, Luxembourg, Latvia, Lithuania, Netherlands, Norway, Poland, Russia, Slovakia, Sweden, Switzerland, England are not many and the map is wide.

More or less the concept of this ATS game is similar to ETS 2, which is a truck driving simulation, but what is different is the location if ETS is in Europe, if ATS is in America. So you’ll be circling those vast American cities. This game was released in 2016, it’s been 2 years but because America is a vast country that has more than 300 cities.

So, in ATS, not everything is open, the author happened to play this one game and the newly opened map is only in the areas of San Jose, Los Angeles, Sandiego, and Phoenix. It is possible that in the future the developer will expand this game map again.

This is the second series of the Overcooked game presented by Ghost Town Games and Team17 Digital, this game was released on August 7, 2018, and at the end of 2018, it won an award at The Game Awards 2018, namely Winner Best Family Game.

Naturally, because this game has proven to be fun and safe to play with your family, you will work together with each other to serve dishes. During serving food, several exciting challenges will be presented, starting from putting out fires and other things.

Who would have thought that a simple clicker-style game could be popular and played by many people? It’s all evident from this game made by Hyper Hippo called AdVenture Capitalist, how to play this free Steam game only requires making the numbers big and then getting a lot of money, look simple? Just try it for free.

This is the explanation of the 25 best small size games for PC Windows 10 PC. You can play with your friends play for free. If you have any ideas, suggestions, or criticisms? Please leave a comment in the column below!